And I had started University in the September of 2003, my friends and I all followed and chatted to each other on MSN messenger & organised our students nights by communicating through text message and calls. Then someone said ” Hey check out this site, sign up and add me”

I log on, typed in www.myspace.com, signed up and was greeted by this guy.. Tom

Thomas Anderson was the founder of myspace and let face it he was really the first guy, the guy before Zukerberg who had mainstreamed his platform and by 2006, Myspace was the largest used social media platform.

If I’m honest I didn’t really connect with it. Yeah it was ok, but the process was too lucid and slow in many ways. The best part was designing your layout and background for your myspace. This was the first part of being bale to reflect your online identity.

My friend Ashley from University was always redesigning her site, embedding the HTML coding and it really was a way to reflect your personality and in some respects it was really the first ever e-portfolio site we had. Now working for the Financial Ombudsman in London as a Communications manager Ashleys’ experiences of this social media tool has had an impact on what she does today.

…”I remember MySpace being a massive upgrade from MSN Messenger. It allowed you to find friends, share photos, join groups and have a funky background! Back then it was the online way people would engage with each other – sometimes more so than in real life! The creative part of MySpace was huge, rather than just having your personal page you could have a professional page which allowed you to share what you’ve been working on – whether that’s music, art or films. Once I knew my favourite artists had a MySpace page I used it to keep up to date with their latest music and browse their photos. I think MySpace was a lot less regularly updated when you compare it to today’s real-time social media. I used it to share my portfolio as it was an accessible way for prospective employers in the film and TV world to view your work.”..

What was great about it, was finding music. Musicians like Lily Allen, Amy Winehouse & Adele, used myspace to put their demo mixtapes online and blog about what they were doing. The 2006 article by Pitchfork entitled ” The Social networker of the decade”, interviews a new musician called Lily Allen, who is seen to be self-publishing online.

MySpace was a catalytic tool in how she developed her identity as a musician, how to use it like a pro to get your best works music out there, this was before she even had a website.

She was part of a community of people, who were her own age, using myspace as a way to channel music and acted as an instant feedback tool for her work. It was about having the balls to put it out there.

This ability to customise your website added that polished feel (well for the early 00’s online design compared to what we have today). This was the stage where pixels were gaining greater DPI, experimentation creatively online was allowing seeing a new creative movement, just like the print press of people taking something and going what can we do with this to get heard? 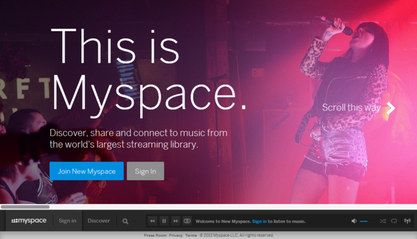 As the success grew, so did the platform on which Allen had started on. Now like myspace, it’s more linear in the workflow, this polished finish and now focuses very much on the music as oppose to social.

In many respects Allen has grown with social media, using new tools like Instagram but she, like so many popular online profiles have ended up in the negative end of the online spectrum of what is not healthy. This interview took place in 2014 nearly ten years on from the previous and it’s interesting to compare the 10-year development of thought. The Internet Vs Lily Allen

So how has myspace influenced me? Several ways, to start off with it was the first ever social media communication tool, that allowed for customization, slower networking (not instant like MSN) and this element of building a social community. I will honestly say at the time I remember thinking, this is hard to engage with and what the point of this. It wasn’t until creatives started talking about it did I see the use of it, and I would kick myself in thinking, why hadn’t I done that? It is however never too late to start.

However, this experimenting with social media tools with our pre-internet heads has meant that I have grown up being a ginuea-pig for social media creators and for my own learning and professional development.

I think MySpace has had a huge impact on the way we communicate today. It definitely influenced the development of other social media platforms. As a Communications Manager its fundamental to my role. At the Financial Ombudsman Service we provide a service for everyone – so it’s imperative that we’re relevant and accessible. So it’s important we have an online presence across a variety of social media platforms so we can reach those who need us and so people have the choice to communicate with us in a way that fits into their day to day life’s. We know more and more people are using tablets and mobile devices to get in touch with us – and are using social media to engage. I’ve grown up seeing the development of social media as a user myself so its become the norm to use it in all aspects of my life. I guess the main thing I’ve learned seeing the development of social is that to be able to engage with people and to be relevant and accessible you need to move with technology – understand your audience, learn how they communicate and what they expect. You have to keep up to provide a service that is fit for purpose, but you also need to be able to recognise what’s appropriate for your business. 10 years ago businesses and public services weren’t using MySpace to engage, much like today we wouldn’t use SnapChat. But Twitter, LinkedIn and Facebook are great channels for the Financial Ombudsman – people wouldn’t be surprised to see us there and feel comfortable reaching out and engaging.-

So essentially what Myspace started out as, has now developed into something, that you would most likely find a musician on. Compared to how my age group of generation Y.

So how does Myspace fair in today’s social media climate. Myspace is a tool and its pretty cool. You can still find musicians, it acts as an e-portfolio for musicians and artists. So whether you are a musician , film maker looking for sound or someone to work with then this is an another avenue to explore. It might come second to SoundCloud, however if there is a community, the question you need to ask yourself is, are you taking part?